Exercise 5: Two of your characters are having a conversation through some form of modern technology. (This could be modern as in the fast food window, modern as in “new for the 19th century” modern, or future-world modern.) How does the technology impede their communication? How does it assist? Do hijinks ensue? Or does the miscommunication have fatal results?

OK, with apologies to Tanja and other German speaking friends, as soon as I read this challenge, I could not help but think of this video from an advertisement for Berlitz language training a few years ago. It highlights the danger of miscommunications.


The light over the phone caught Cliff's eyes before he heard the klaxon, he put down his fluid density scale and walked over to the phone hood. He picked up the phone, an explosion proof design, with an ancient looking handset,  and covered his other ear with his hand. The noise of the mud pumps as they stroked, the hum of their huge electric motors deafened him and made normal conversation nearly impossible.

He could barely hear the voice on the other end, it was Billy, the tool push. He was in charge of all the rig crew, his position had gone to his head. His voice was nasal, his East Texas accent almost a foreign language to a prairie boy. "Ya'll got to cut that mud weight back, son. Ah'm fixing ta get this well drilled, and that casing run in before that storm hits."

Cliff replied "I don't think that is a good idea. I am seeing long splinters of shale coming over the shaker screens, and the mud is coming back gas cut and bubbling. The logging crew told me there are traces of gas recorded up on their sniffer at the return line. We need to weight up the mud now."

Cliff cringed when he heard Billy's reply "Screw that, boy. Start watering back, and let's get this thang drilled. Now! Do you hear me?"

Cliff turned around and walked back to the mixing hopper. A roughneck, Tom, stood there, slowly feeding another sack of barite to make the mud heavier into the hopper. His eyes opened wide when Cliff gestured with a slashing motion across his throat with the tips of his fingers to cut it, stop mixing the material.

The roughneck, a green hand, but wise,  leaned forward, and yelled into Cliff's ear "What? If we don't get the weight up, we are gonna take a gas kick!" Cliff shrugged and leaned forward to yell back in Tom's ear "I know, but that idiot tool push insists. Asshole is going to get everybody killed someday."

Cliff walked over to a standpipe, and opened a tap, water flowed into the first tank, it would be mixed in the tank with the huge agitator rotating, and stirring the contents before it flowed over into the next tank, and then into the pumps to be circulated down the drill pipe and back up out of the hole.

It was only the density of that column of drilling fluid that held back the extreme pressure found at that depth, and all the signs Cliff  saw told him it was on the edge of underbalanced right now. Any reduction in density would present a problem, the hole could slough in and stick the pipe. A kick could occur, that could cause a big bubble of gas and a further reduction in the back pressure. If that happened a blowout could be next.

Cliff put his mouth close to Tom's ear and said "Don't let the weight drop below 11.8 pounds. If it does, cut back on the water. I am going to talk to the company man. This is their well, not Billy's. Maybe he will listen to some common sense, for sure that asshole Billy ain't gonna."

He walked across the grated walkway on top of the tanks and opened the watertight door at the end of the mud pits. He stepped out of the loud steamy room and onto a grated landing. The sea air was a refreshing change from the smell of chemicals, and the oppressive wet heat. He looked up at the rig floor, saw the pipe rotating, the blocks slowly lowering as the drill bit cut through the shale thousands of feet below.

Cliff turned to go up the stairs to the offices. He looked out over the ocean and saw the standby boat, in a position a few hundred meters away, its navigation lights bobbed with the roll of the waves. It was calm, a clear night, except for a low band of cloud in the east. The clouds were the front edge of the storm that they were warned was to come. The early dawn light made the clouds stand out against the dark sky and made them appear more ominous.

He had just reached the door to the offices when a strong vibration shook the platform, Cliff looked back at the drill floor, and saw that the rotary table had stopped turning. He saw one of the roughnecks as he ran to the blowout preventer panel. He sensed rather than heard the changed tone, the new sounds. He realized the drill pipe had become stuck, and judged by the different vibration of the pumps that it had sheared off in the hole.

A low rumble reached his ears, he saw mud come blowing up from under the rig floor, it sprayed in every direction. Blowout! The platform alarm began to wail.

Cliff turned to go back to the mud pits when the rumble of the flow changed, and a ball of fire lit up the rig, as bright as daylight. Cliff was knocked flat by the blast that hit him. Flames shot up to the top of the derrick, the entire platform was smothered in flames. 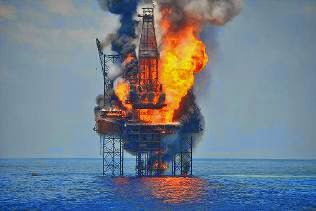 Email ThisBlogThis!Share to TwitterShare to FacebookShare to Pinterest
Labels: #WriteFridays